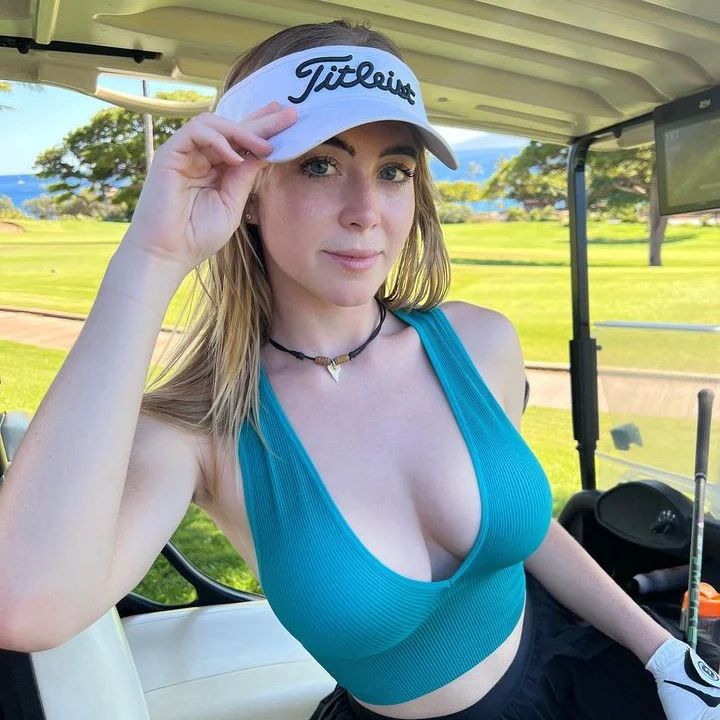 Grace Charis is all curves as she shows off a golfer girl look while teasing her fans.

The golfer is currently in the news for enjoying a massive uptick in popularity – with nearly 3 million TikTok followers, Grace is living her best and most famous life as she shoots up trends, and her IG fanbase is climbing, too. In a recent share posted for her 900,000+ Instagram followers, Grace showcased her assets in a low-cut, purple, and cropped top, plus a tiny golfer skirt.

Putting On A Curve Show

All smiles as she stood holding a club behind her shoulders, Grace drew attention to her toned abs and tiny waist while going eye-popping in her tight top and adding in a pink flower necklace affording feminine flourishes. The blonde bombshell made sure to flash her pearly whites while rocking a black visor and her luscious locks down – she also went pleated in a teeny white miniskirt matching one glove.

Tagging herself in Hawaii, Grace wrote: “I found the sweet spot…” A swipe right showed a similar image as Grace went cheeky and pursed her lips. Fans have left over 130,000 likes.

Grace is also earning cash on OnlyFans – the 26-year-old Californian has offered fans over 900 X-rated posts so far. Also on the platform are celebrities including rapper Cardi B and former Disney star Bella Thorne.

As to golf, Grace has only been in the game for two years. She told her TikTok fans that she started the sport “during COVID which felt like a few months ago.” That said, she’s already being compared to heavyweight golfer Paige Spiranac. Sky’s the limit for Grace!